First place in Group A at the World Cup is up for grabs on Monday, June 25th. The hosts from Russia have been great so far, while Uruguay has not played their best, but both teams have six points. 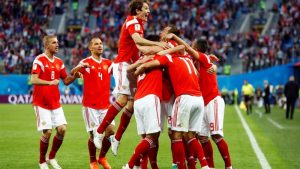 What To Know About Uruguay

Luis Suarez got on the scoresheet in the 23rd minute, and it was all that Uruguay needed for a 1-0 win over Saudi Arabia. It was a chippy game on both ends, but Uruguay held Saudi Arabia at bay for the most part. Still, it was not a great performance by Uruguay as Suarez and Edinson Cavani still missed a few chances that they will have to put away to win the group, and if they want to go far at the World Cup. Their midfield was scrappy enough in protecting their defense, but there was not enough creativity going forward and that is something that Uruguay will need to fix heading into the knockout stages of the tournament. If not, they will be in big trouble.

What To Know About Russia

Russia romped to the knockout stage with a 3-1 win over Egypt in their last match. They got an own goal from Ahmed Fathi in the 47th minute, and then Denis Cheryshev and Artem Dzyuba scored within three minutes of each other around an hour into the game to seal the deal for Russia. They were very disciplined in cutting off Egypt’s supply line to Mohamed Salah, who was Egypt’s main threat (he still got on the scoresheet from the penalty spot). The Russians have been flying with eight goals in their first two games, and Cheryshev has been fantastic since coming on for the injured Alan Dzagoev in their 5-0 rout of Saudi Arabia. However, they have played a Saudi Arabia team that is not very good, quite frankly. They also played an Egypt team in Salah’s first game back after injury. This will be more of a true test of how good Russia really are.

Uruguay are the favorites for this Group A showdown at 2.45, while Russia comes in at 3.10 and a draw is rated at 3.00. These two played to a 1-1 draw in a friendly match in May 2012. Suarez found the back of the net in that game and he will have to do so again for Uruguay. Russia have the upper hand going into this match as their goal differential sits at +7, while Uruguay are at +2. However, Russia would like to avoid sitting back and letting Uruguay come at them because a draw would lock up first place for them. Their midfield has played much better than their Uruguay counterparts so far, and that could be the difference in this match. But the matchup to watch is how Russia’s defense deal with Suarez and Cavani, who would be a good bet to score goals eventually. This is going to be a very interesting game and with first place on the line, look for both teams to come out firing.