Group B at the World Cup will wrap up on Monday, June 25th. Morocco have been eliminated, but they can play the spoiler against Spain, who have been inconsistent through their first two matches. 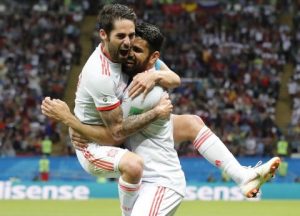 What To Know About Spain

Spain dominated possession against Iran, but only a Diego Costa deflection gave them a 1-0 win in the 54th minute. Costa happened to be in the way of an attempted clearance by Iran’s Ramin Rezaeian, but you have to get some breaks in the World Cup. Isco was Spain’s best player by a mile in this game as he constantly probed against an Iran defense that had basically everyone behind the ball. But the decision to start Lucas Vazquez backfired for Spain as he did not offer any width, which was what he was brought on to do. Andres Iniesta has played like it is his last World Cup; while he will go down as one of the great players of the game, he is clearly past it. Spain are still a very good team, and the thought is that they will play better against better competition. However, they have not looked good in matches against Portugal and Iran and they have to find another gear, quickly.

What To Know About Morocco

Morocco played their hearts out against Portugal, and they should leave the World Cup with their heads held high after a 1-0 loss. They did have a mental error early in the fourth minute by allowing Cristiano Ronaldo to head home, and that is the margin of error at tournaments like the World Cup. However, Morocco did not get down on themselves and sit back. Instead, they took the game to Portugal and they were unlucky not to get a penalty after Pepe handled the ball in the area. Nordin Amrabat and Hakim Ziyech, in particular, were excellent and created a few chances for their country. Morocco should have had a point in their opener with Iran, if not for Aziz Bouhaddouz’s late own goal. They probably should have gotten a point in this game against Portugal. But still, it was a solid performance from Morocco, who were back at the World Cup for the first time since 1998. They still have some work do to against Spain.

Spain are the favorites in this Group B match at 1.36, while Morocco are valued at 10.00, and a draw comes in at 5.25. This will be the first time that Spain and Morocco have gone head-to-head in international soccer. Morocco will probably look to do what Iran did against Spain, which is to put 11 players behind the ball and try to counterattack. They also have to put away what chances they get, and that will not be many. While Sergio Ramos and Gerard Pique have been up and down in central defense  for Spain, they are still an excellent pairing. Spain, at worst, should get a draw and move on to the next round. But going forward, they have to improve dramatically.