Portugal got a massive performance from Cristiano Ronaldo in their Group B showdown with Spain. Morocco lost a fantastic chance to get a point in their opener. These two will go head-to-head on Wednesday, June 20th. 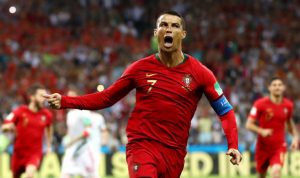 What To Know About Portugal

Ronaldo opened the scoring in the fourth minute from the penalty spot, then added another before halftime to give Portugal a 2-1 lead. The Portuguese captain then scored in the 88th minute to give his team a 3-3 draw with their Spanish rivals. Ronaldo became just the fourth player to score in four consecutive World Cups, and it was a vital point for Portugal. There are still some issues for Portugal to work out, especially at the back. A good team like Spain were able to capitalize on those mistakes, and that could come back to haunt Portugal. But when you have a player like Ronaldo, you can make a mistake here or there and he proved his worth on the biggest of stages.

What To Know About Morocco

Morocco were the better team for much of their first game against Iran. They had 68% of the ball, and Morocco had 13 shots, but could only put three of them on target. That came back to bite them as substitute Aziz Bouhaddouz put a header into his own net five minutes into injury time in the second half, sending Morocco to a 1-0 defeat. It was not the ending that Morocco deserved, but in the World Cup, it is not about what you deserve, but what you can get. They simply did not take advantage of their chances and while Bouhaddouz did put the ball into his own net, Morocco should have had that game in the bag by then. Now, they have an uphill task against Portugal.

Portugal are the favorites in this matchup at 1.47, while Morocco are rated at 6.69 and a draw comes in at 4.22. Portugal lost to Morocco by a score of 3-1 in the group stage of the 1986 World Cup in their lone meeting. Morocco have to get over their heartbreaking loss to Iran quickly, because Portugal will be in a mood to show they are better than their game against Spain. Morocco’s defense will have a much tougher time trying to marshal Ronaldo, and that means for Portugal, other players have to step up. Bernardo Silva has to be better than he was, along with Bruno Fernandes. The Portugal midfield cannot allow themselves to be overrun like they were at times against Spain. That being said, Morocco does not have the players that Spain does, and they will likely look to pack themselves at the back and make Portugal find a way through. Portugal should be able to do so because Ronaldo only needs half a chance to find the back of the net. If he continues to play this way, Portugal could make a deep run at the World Cup. As for this game, Portugal should be able to get the three points easily enough.