Group B at the World Cup is still very tight going into the final round of games. Portugal has four points, while Iran trails by a point as they prepare for a huge meeting on Monday, June 25th. 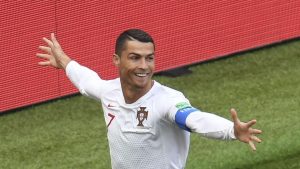 What To Know About Iran

Iran were stubborn once again, and they might have been unfortunate to come away with a 1-0 loss to Spain. Defender Ramin Rezaeian tried to clear the ball in the 54th minute, but it deflected off Spain’s Diego Costa and went into the net. Saeid Ezatolahi also had a goal called back for offside thanks to the VAR (video assistant referee), but it was a very good performance from Iran. Captain Masoud Shojaei and Alireza Jahanbakhsh were left out of the starting lineup, possibly because they picked up yellow cards against Morocco. But their plan to defend and hit on the counterattack worked, for the most part, and now Iran has a massive chance to make it to the round of 16.

What To Know About Portugal

Portugal got a goal from Cristiano Ronaldo in the fourth minute, but were fortunate to come away with a 1-0 win over Morocco. Portugal seemed to take their foot off the gas and let Morocco back into the game. They also could have conceded a penalty as Pepe got away with a handball in the box, but you take the breaks where you can get them. It seemed like it would be a rout in the first half, especially after Ronaldo scored his 85th goal for his country, and fourth of the tournament. But again, they will need a much better effort if Portugal wants to make a deep run at the World Cup. Their midfield struggled to shield a defense that was shaky at times, and only Ronaldo looked like he would find the back of the net. Goncalo Guedes has started both games at the tournament so far, and he looks every bit of his 21 years starting alongside Ronaldo. Outside of their captain, only goalkeeper Rui Patricio can say he had a good game against Morocco.

Portugal comes in as the favorites for this Group B matchup at 1.75, while Iran are rated at 5.50 and a draw comes in at 3.70. These two countries have met once as Portugal defeated Iran 2-0 in the group stage of the 2006 World Cup, with Ronaldo scoring his 12th international goal at the time. Iran will likely bring back Shojaei and Jahanbakhsh, and the latter will be especially important as Iran has to win this match to go through. He might be their most dangerous attacking threat, but Iran also has to be careful that they are not exposed at the back. Of course, all eyes will be on Ronaldo as Portugal’s biggest threat, so one of his teammates have to step up and help their captain. It will be interesting to see how much Portugal wants to attack, or if they are willing to settle for a draw. This should be a fascinating matchup.