Germany enters the World Cup in Russia as the defending champions, and winning the group shouldn’t be a problem. South Korea will likely bring up the rear. The real battle comes between Mexico and Sweden for the second place, and the edge goes to Russia. 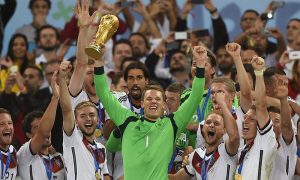 Germany are embarrassingly deep. Timo Werner might start up front at 22 years old. Then you have Thomas Muller, Marco Reus and Mesut Ozil going between midfield and attack. Toni Kroos is still one of the best midfielders in the world when it comes to setting tempo. Sami Khedira does the dirty work in front of the defense. Mats Hummels leads the back line, although Jerome Boateng is arguably better. Joshua Kimmich is blossoming into one of the world’s best fullbacks. The big question concerns the fitness of goalkeeper Manuel Neuer, who has been out most of the season. Even then, Marc-Andre ter Stegen could be the #1 goalkeeper on 90% of the other teams in this tournament. Winning Group F is the least of Germany’s worries. They are a favorite to win the whole thing once again.

Mexico has a strong front three in Javier Hernandez, Carlos Vela and Hirving Lozano. They’re also an organized team at the back. Goalkeeper Guillermo Ochoa was on his game in Brazil in 2014. It is the midfield that could be a problem for Mexico. They can be overrun and in this group, that could be their downfall. Also, manager Juan Carlos Osorio continues to tinker with formations. That’s not encouraging with such a short time left until the tournament starts. Mexico should barely get to the next round. Then they should go out in the round of 16 for the seventh World Cup in a row.

Sweden might be better off without forward Zlatan Ibrahimovich, who retired from international play. The team plays better as a group, led by midfielder Emil Larsson. Captain Andreas Granqvist and Victor Lindelof have the potential to be a very good pairing in central defense. However, sometimes you need a player that can turn a game on its head in a moment. At 36 years old, Ibrahimovich might not be anymore. It would be fun to see him try, though. If everything goes well, Sweden could possibly get past Mexico. However, that rarely happens at the World Cup.

South Korea are fine going forward, led by Son Heung-Min. Midfielders Lee Jae-Sung, Kwon Chang-Hoonn and Lee Sae-Jung are also solid and should be able to hit teams on the counterattack. However, South Korea has struggled defensively for a long time now and they haven’t solved that issue. In this group, it is going to be tough to survive with a bad defense. They can be a very entertaining team to watch, but that doesn’t bode well for their chances to win. They’ll go out on bottom in Group F.