Brazil is out for revenge after their tough semifinal loss to Germany at home in the 2014 World Cup They should power through Group E to win it, but then things get tight. Serbia should have enough to squeak into the second spot. Switzerland will fall just short and Costa Rica will look up at the rest of the group. 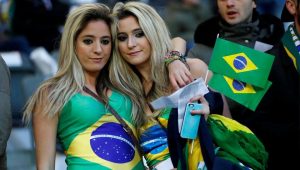 Neymar missed the loss against Germany due to injury, and he was hurt in the Champions League this season. He should be back for Russia, and close to 100%. That means trouble for Group A. However, this is a deeper team than before. Philippe Coutinho leads a very deep and balanced midfield that can also defend, while forward Roberto Firmino was fantastic during the club season. Even in defense, Brazil has a lot of options, despite the injury to Dani Alves. Alisson should start in goal, but Ederson is also very good. This is a team that can win the World Cup, and they should have no problem winning Group E. The sky is the limit for Brazil, which might have more pressure on them than any other team going into Russia.

Serbia has the potential to have one of the best midfields in the tournament. Nemanja Matic is one of the world’s best defensive midfielders. But Luka Milivojevic and Sergej Milinkoc-Savic have come on strong and give Serbia balance going forward. Aleksandar Mitrovic is showing a lot of potential for a forward at 23 years old. There is also experience at the back. If Serbia plays to their potential, this is a team that can make it to the next round and possibly upset a team.

Switzerland are going to find it tough to get out of Group D. Midfielder Xherdan Shaqiri is his team’s best attacking force, but he is looking to move to another club. That could be good for Switzerland, but if selfish Shaqiri comes to play, they’re in trouble. They don’t have many other attacking options. Fullbacks Stephen Lichtsteiner and Ricardo Rodriguez are solid enough, but they’re also 34 years old. /Switzerland has a decent team, but they’re not good enough to get to the next round.

Costa Rica were one of the surprises of 2014, going all the way to the quarterfinals. That won’t happen this time as their best player is goalkeeper Keylor Navas. He is a wonderful goalkeeper, but Navas will have to pitch shutouts throughout the tournament as they don’t score many goals. Forwards Marco Urena and Joel Campbell were both injured leading up to the World Cup. That means they won’t be at their best; even if they were, their best isn’t that great. That means the defense and Navas will have to stand on their head. That isn’t good enough when you get to the World Cup.