Group D at the World Cup in Russia looks like it is Argentina’s to lose. However, Croatia will make it difficult and land just behind in second place. Iceland and Nigeria will battle for third, and Iceland’s momentum will carry them to that spot. 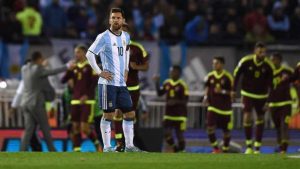 When you have Lionel Messi on your team, you should be able to win your group. Messi is still in the conversation for the best player in the world, if not the very best. However, he tired in the 2014 final when Argentina lost to Germany. He did get some rest at the end of the club season, so that should help Argentina. Sergio Aguero and Gonzalo Higuain need to step up, and Angel Di Maria needs to stay healthy. Losing goalkeeper Sergio Romero to a knee injury is a big blow, and Argentina has some questions to answer in defense. However, that will come later. They have more than enough to win Group D.

Croatia has a midfield that any team in the world would love to have. Luka Modric, Ivan Rakitic and Ivan Perisic are incredibly talented. Then you have Mateo Kovacic, and he might not even start. Mario Mandzukic isn’t afraid of big games up front and can put away chances. But like Argentina, Croatia has a shaky defense. Their attitude has left a lot to be desired in the past as well. If they’re in the right mindset, Croatia could upset Argentina. At the very least, they should lock up second place in Group D.

Iceland rode the wave of their European Championships run to first place in their UEFA qualification group. However, they have had some bad luck leading up to the World Cup. Midfielder Gylfi Sigurdsson is just coming back from a knee injury and probably isn’t close to 100%. Fellow midfielder and captain Aron Gunnarsson has also been battling a knee injury. Forward Kolbeinn Sigthorsson had to miss the tournament because of, you guessed it, a knee injury. Iceland does have a solid team spirit, but that won’t be enough to get them to the next round. It should be just enough to keep them out of last place in the group.

Nigeria actually has a good team coming into this World Cup. They have a lot of youth going forward, led by Alex Iwobi, Kelechi Iheanacho and Wilfred Ndidi. Jon Obi Mikel gives the team experience and he can shield the defense. However, he’ll have his work cut out for him in Russia. The back line isn’t close to world class and goalkeeper is a problem area. Nigeria might have to go with 19-year-old Francis Uzoho between the sticks. That has disaster written all over it, and could be the reason that Nigeria finishes last in Group D. If nothing else, one thing is for sure: Nigeria’s games are going to be entertaining.