Group C at the World Cup in Russia is France’s to lose, but it gets trickier after that. Denmark has pole position for second place, while Australia are going to be a tough team to eliminate. The wild card, however, is Peru, who have a small chance of getting their best player back for the tournament. 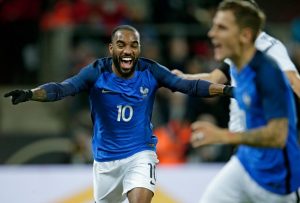 On paper, there aren’t many teams more talented in the world than France. Starting with Antoine Griezmann and Kylian Mbappe up front, Paul Pogba and N’Golo Kante in midfield, Raphael Varane and Samuel Umtiti at the back in front of keeper Hugo Lloris. However, the game isn’t played on paper and France has shown that they can be overconfident and play down to the level of their competition. This can be a very frustrating team for their fans, but France should easily walk away with this group. It is further down the line that France will have to improve. There is no reason why this team can’t reach the semifinals.

If France has the best five or six players in the group, then Denmark has the next best player in Christian Eriksen. The midfielder is coming off an excellent season at Tottenham and scored a hat trick against Ireland to fire Denmark to the World Cup. However, after Eriksen and Pione Sisto, Denmark’s attack drops off. However, it gets worse at the back as Denmark are very weak at the full-back position and not much better in central defense, which means they can be beaten by pumping in cross after cross. This makes them vulnerable against a team like Australia, but as long as Eriksen continues to play as he has, Denmark should make out of Group C.

Australia will be a very tough team to play against, even after Ange Postecoglou left his role as manager and was replaced by Bert van Marwijk. But Australia has a very solid midfield led by Mile Jedinak and Aaron Mooy; the latter could be one of the top players to watch in this group. Up front, Tomi Juric should get the start, but Tim Cahill brings a lot of experience off the bench. At the back, Australia has to shore up, but with a few breaks they could wind up going to the next round.

Peru are slated to bring up the rear and that is largely due to the absence of their captain. Paolo Guerrero has been suspended for a drug infraction and even though the captains of France (Lloris), Australia (Jedinak) and Denmark (Simon Kjaer) wrote to FIFA and asked for leniency on Guerrero’s behalf, it doesn’t look like it’ll work. Peru has some solid players in midfield and at the back, but with Guerrero out, there isn’t much in the way of goalscoring outside of Jefferson Farfan. Peru might be able to come together and be inspired by their captain’s absence, but getting a point would be impressive for this team, which is back in the World Cup for the first time since 1982.