The World Cup is less than a month away from kicking off in Russia. That means it is time to start laying down some predictions for what will happen. Let’s start with Group A, where Uruguay should win the group. Following that, Russia should edge out Egypt, while Saudi Arabia brings up the rear. 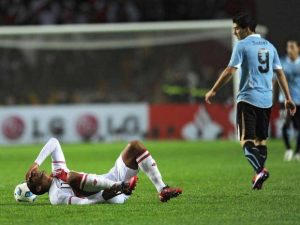 Uruguay has the tools to run away with this group. Edinson Cavani and Luis Suarez are as good a strike pair as you’ll find in Russia this summer. Captain Diego Godin leads an experienced unit of defenders. However, their success could hinge on what they do in the midfield. They have some solid players, such as Cristian Rodriguez and Matias Vecino, but they need someone to support the strikers. That being said, they have enough to win this group. They’ll simply have to figure out the rest later on when they come up against better competition, but winning Group A would really help out Uruguay.

Russia are fortunate to be in this group as this isn’t a very good team. Viktor Vasin and Georgi Dzhikiya won’t be able to play at the back due to injuries, and the defense has looked poor in friendly matches. They’re very dependent on Fyodor Smolov for goals up front, and in midfield, Alan Dzagoev and Aleksandr Golovin have to step up and support Smolov. Also, as the host team, Russia could benefit from a few bounces and calls from the officials. They’ll need every bit of help they can get because Russia isn’t a good team and while they are picked here for second place in Group A, it isn’t a confident pick.

Egypt has every chance to sneak past Russia into the second spot in this group, and it is based on one player. Mohamed Salah has been incredible for Liverpool this season and when he is on his game, he is tough to contain. You could also make the argument that Salah has been the best player in the world during this last season. However, he doesn’t have the same level of help that he has with Liverpool, so teams can focus on Salah because his supporting cast is below par. He doesn’t need much help, just a little bit.  Trezeguet could be the best bet to step up and if he does, Egypt could shock Group A at the World Cup and that would be huge for this team.

Saudi Arabia will be hard-pressed to come away with a point from this World Cup tournament. Juan Antonio Pizzi is the team’s third manager in less than a year, and they simply don’t have many good players. Midfielder Yahya Al-Shehri is their best chance for any offense, but he hasn’t gotten much playing time at Leganes in Spain this season. Other than that, there isn’t much to talk about when it comes to Saudi Arabia. This team has some experience together, but it is woefully short on quality, especially at this level of play.