The slot Hall of Gods – one of the most popular NetEnt games, dedicated to the Scandinavian Gods. It launched in December 2010, and since then, more than a dozen of players became millionaires playing Hall of Gods. 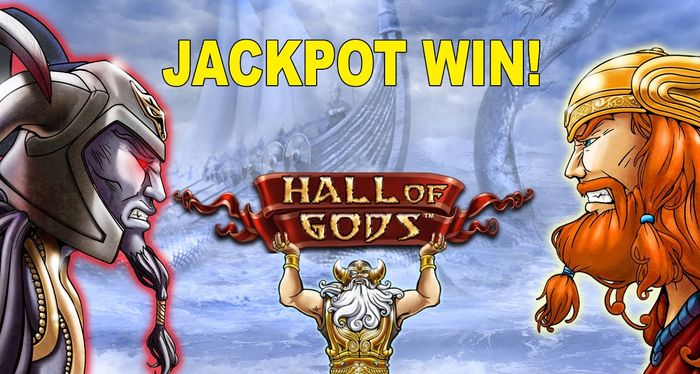 We offer you an snapshot of all the jackpots that have been won in the NetEnt Slot Hall of Gods, from 2011 to this day. The information is updated with the appearance of each new mega jackpot owner. By the way, you may become one; start playing in the Hall of Gods at the online casino ShangriLaLive.

An amazing fact! Almost all of the jackpots of Hall of Gods went to players from Sweden and Norway. Apparently, this is because the Nordic Gods theme of this game resonates better with Scandinavians.

Below are all the winnings of the mega jackpot Hall of Gods, starting from 2011, the information is regularly updated. Since the main currency of the game is €, all the wins are listed in it.

On the evening of April 2, a tired 37-year-old man has returned home from work and decided to play a little. He was playing on a mobile device. A bet of €10, in one swift moment, has turned into almost 7 millions. This is the first jackpot of 2018 which happened after a half-year of absence. 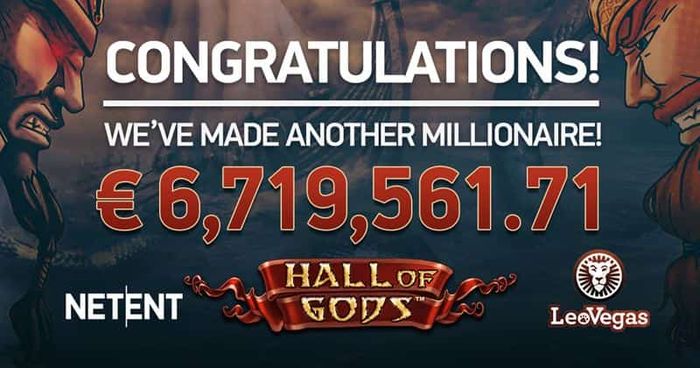 The player wished to not disclose his name yet said that he lives in Sweden. Like many other lucky players, he said that he could not believe in it at first. A part of the sum he plans to spend renovating his house. 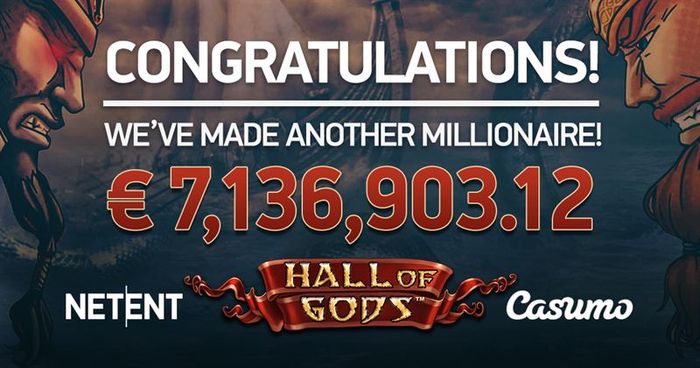 Neil was at home playing on his laptop while wife and two kids were watching TV. He decided to try out a new casino and after the first deposit of £ 30 made bets in different games.

He tried different slots but then received a bonus and decided to try Hall of Gods, with an impressive progressive jackpot. Neil bet 4 quid and right away received one of the biggest jackpots in history. Being shocked, he called over his wife to make sure he was not hallucinating. Both of them needed some time to realize what had happened.

Neil told about his first minutes after the win: “When I have put my mind back together, I asked mom and dad to come over. I told them that I won some money and wrote the sum on separate pieces of paper, put them on the floor and asked them to guess what it was. They thought that it was a lottery number!”

Neil is a fan of FC Liverpool. First things first he decided to buy a season pass for their games.

“I want to buy my parents a summer house in Tenerife. They will like it. Then, I will take my kids to Disneyland and visit my sister in Australia”.

Neil wants to make the world a better place. He is already a member of cancer charity, Macmillan Cancer Support; he wanted to donate a part of his jackpot towards this organization.

When Lars won the jackpot, he was in shock and called the support team to make sure that the victory was real. He said: “I’m calling, because I need to check that I actually have 1.7 million in my account. I can not believe that this is true! ”

The lucky gentleman commented on the victory: “It’s incredible. I could not sleep at all. I cried so much when I won; my girlfriend thought I had a heart attack.”

May 28, 2014, had one of the most worthy victories in the history of the Hall of Gods slot. The 50-year-old father of five children from Sweden, who also works with disabled children, won a whopping € 7,361,652.

Here is how he commented on his victory: “It was my lucky day, I won € 100 here and € 100 there, and decided that I should use good luck that I had and keep on playing. When I hit the jackpot just after midnight, I could not believe my eyes. ”

The lucky man lives in the province of Vermland. Using the money he had won he decided to buy a house and a car, which he had long dreamed of. He also said that he would certainly help his ex-wife. He added: “I like my work and the feeling that I’m fulfilling my role. Maybe I’ll work a little less in the future, but I will not stop, even if I win one billion. ”

A resident of Aberdeenshire, who wished to remain anonymous, said that victory was his dream come true: “I can compare the feeling of victory only with the feeling that I experienced when my son was born.” He also added: “The first person I told to about the win was my wife. She was just as shocked as I was. This win is a dream come true for my family and me, as this will change our life. Now we are not worried about the future.”

However, the lucky man said that he would continue to fish, because he will miss this calling. When he has time, he will decide what to do with the money, and choose which charities to donate to.

The lucky winner said: “It was a perfect timing winning the jackpot. I have a big family, and I want to share this money with my wife, children and grandchildren, and spend a part to create a new business. When I was playing, my son was next to me, and it took us a while to realize that I really caught the jackpot. Of course, we were very happy when we realized what had happened!

On October 23, 2012, the player with the nickname Kjell E from Norway won the jackpot of € 7,369,161. He did not share his plans for the main prize, but said that he would continue to play in the Hall of the Gods.

On February 8, 2012, a lucky woman from Sweden won € 7,674,233. She wished to remain anonymous, but she shared her impressions of the victory: “You read in the newspapers about people who win large sums, and wish for the same to happen to you… This is a dream that everyone has, and it has come true!”

The very first win in Hall of Gods, unfortunately, remained anonymous. One Finnish student claimed that these first millions went to him. However, this information is not confirmed.