It is still very early in the season for La Liga, but Real Madrid sits seventh in the table and have stumbled out of the gate in their title defense. On Sunday, they’ll head to Real Sociedad, who are second in the table and alongside Barcelona, have won their first three games of the season. 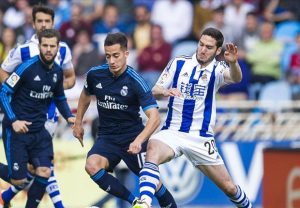 What To Know About Real Madrid

Madrid was held to a 1-1 draw at home by Levante last weekend, getting a goal from Lucas Vazquez in the 36th minute. That was an equalizer to a 12th-minute goal by Levante, and then Marcelo picked up a straight red card in the 89th minute. He’ll miss this upcoming game through suspension. Madrid is still without the suspended Cristiano Ronaldo, who will return to league play after this game, although he will be able to play in their Champions League home game with Apoel Nicosia on Wednesday. It isn’t panic time in La Liga yet as they’re still on five points, which is four points behind Barcelona and Sociedad, but Madrid has to get on track in the league after two straight draws.

What To Know About Real Sociedad

Sociedad got a pair of goals from Asier Illarramendi in a 4-2 win at Deportivo La Coruna. Juanmi and Diego Llorente also scored for Sociedad, who have scored 10 goals to pace La Liga after four games. They did allow a pair of goals to allow Deportivo back into the game, and needed two goals after the 83rd minute to seal the win, and that has to be a little bit worrying to Sociedad fans because you have to be able to stop goals at this level, and you can’t always count on scoring four goals a game. Sociedad is out to prove that their sixth-place finish in the table last season was no fluke, but they need to shore up on the defensive end. Like Madrid, Sociedad has a midweek European match as they’ll host Rosenborg  in the Europa League on Thursday.

Despite their issues, Madrid is still a -150 favorite on the road at Sociedad, who is rated at +375 and a draw comes in at +300. Madrid has won eight and drawn one of their last 10 meetings with Sociedad, who won 4-2 at home in August 2014. Even without Ronaldo on the field, Sociedad might not want to get into an up-and-down track meet with Madrid as Gareth Bale can still explode at any time, and Marco Asensio has played well to start the season. On the other end, Sociedad has a solid attacking trio of Juanmi, Illarramendi and Willian Jose and Madrid has been a little shaky at the back. Sergio Ramos is back from suspension, but now Marcelo is out. It is likely that Nacho will be beside Ramos, but who steps in for Marcelo? This is a dangerous game for Madrid, who can’t afford to get into a deep hole already. Meanwhile, even a point would be huge for Sociedad, and three points is very possible.

Looking for the latest betting odds on all of the La Liga action? Check out Play Shangrila for all of the lines.