Fa-Fa Twins slot is a colourful 3D game from BetSoft that is dedicated to Chinese twins of luck. The cinematographic slot amazes with the graphics and animation that are the trademark of this particular developer.

The game combines classic gameplay with innovative features: sticky reels, gamble mini game, and 243 ways to win. Even without the progressive jackpot you may win up to 810 000 coins! 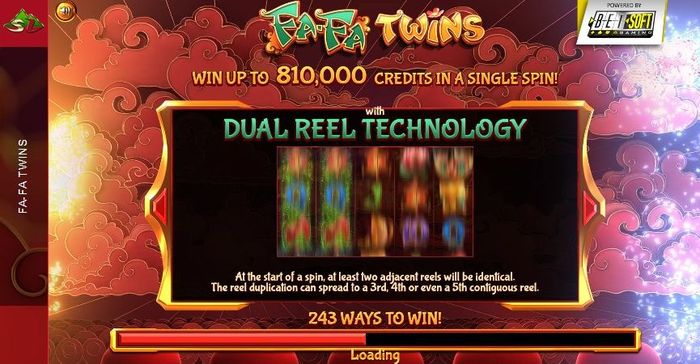 The premier happened February 6, 2017. You may find Fa-Fa Twins at online casino ShangriLaLive, we’ve got the official licensed version.

The game is adapted for desktop devices and mobile platforms. You may play whenever and however you want.

The main theme of the game is twins, which, in Chinese culture, are considered to bring luck. Two lovely girls that may be distinguished only by their hairdos will follow you on your journey to the jackpot. The game is designed in all shades of red and gold, encompassing the charm of Chinese culture. 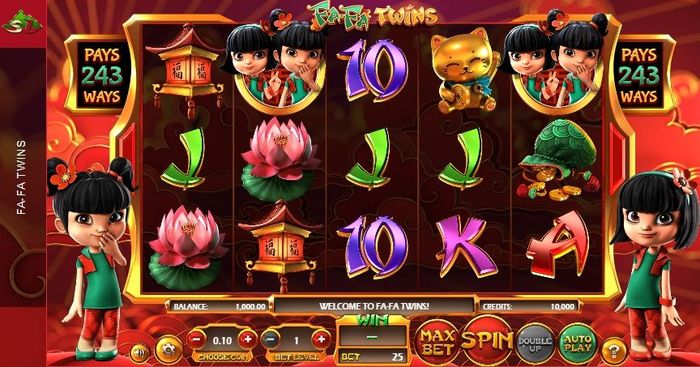 Right before entering the game itself, there is a delightful animated intro. Twin girls will show you a couple of tricks traditional for Chinese theater. 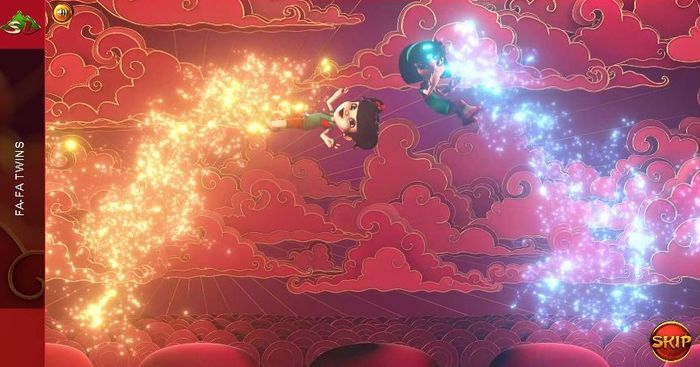 The combos are formed from left to right, starting from the first reel. However, they are not formed on the pay lines but according to the 243 ways to win. 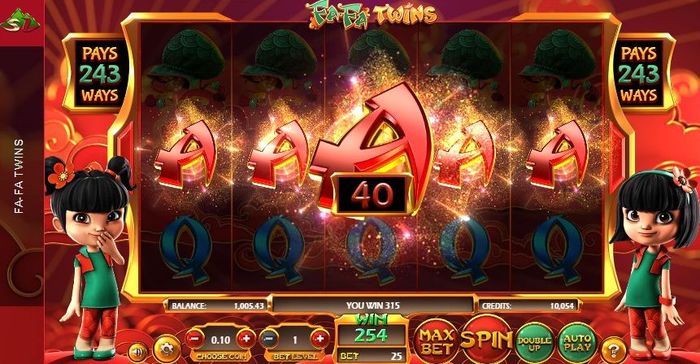 All of the combos in Fa-Fa Twins slot are highlighted, the money won is shown. If you manage to break the bank, the game will launch firework of coins congratulating you. 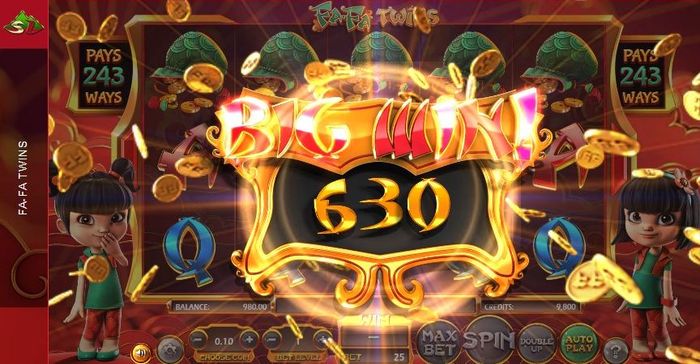 The symbols in this game represent are items from Chinese culture. The higher symbols are the twins, golden carp, lotus, and the money bag. 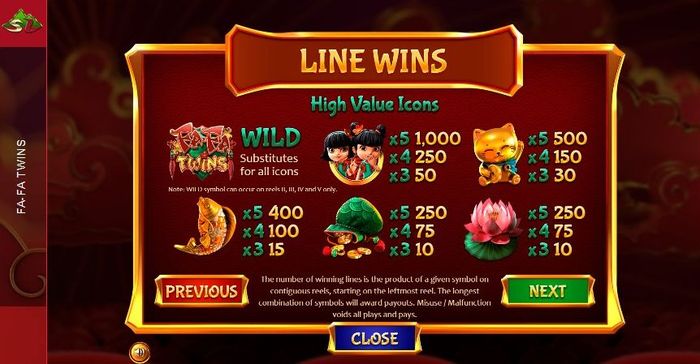 The lower symbols consist of a lamp and card denominations. 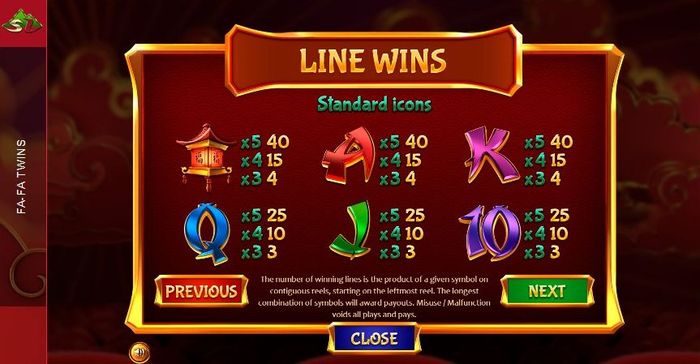 The logo of the game is a wild symbol that substitutes any symbols in the game. It may appear on any of the reel except for the first one. It may also form combos by itself.

Fa-Fa Twins slot is simple in its gameplay with few features.

After any win, if you haven’t got the autoplay turned on, you will have a chance to double your winnings. All you have to do is launch the Double Up feature by clicking on it. 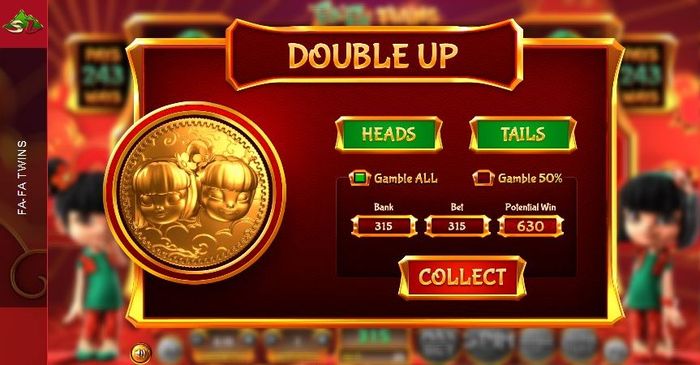 This is a classic coin toss. Choose either heads or tails and maybe, you will double your win. You may play it 3 times in a row, considering you have won the previous coin toss. If you lose, the bet won will be lost, and you will return to the main game.

Dual Reels is the one-of-a-kind feature of the slot that no other has got. It is randomly activated. During a spin, 2 to 5 reels may start spinning together which will result in identical symbols on those reels. 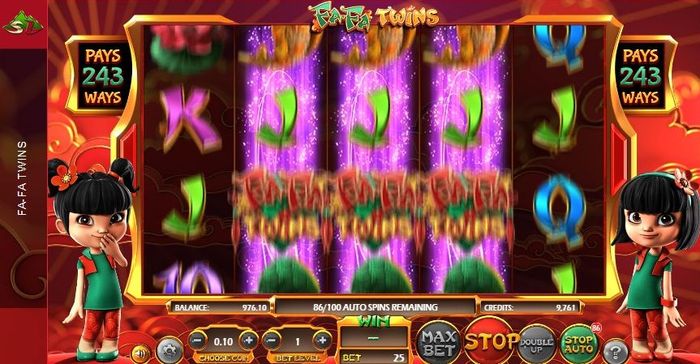 Synced reels bring the biggest rewards in this game.

Before each spin, you may change the bet size with the help of hotkeys. There are additional settings that allow to turn off the sound and animation, make the gameplay faster. 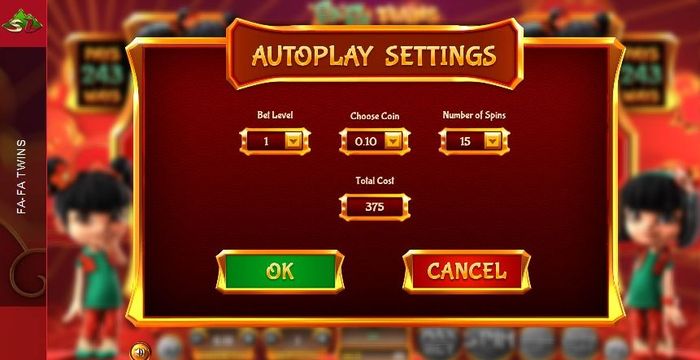 Where to play Fa-Fa Twins Slot?

We advise you to play any game only on the licensed websites that are partnering with BetSoft. Only original slots will allow you to win those 810 000 coins and, what’s more important, withdraw them. Playing Fa-Fa Twins slot on our website, ShangriLaLive, we guarantee you fast and fair payment methods. Moreover, we will double your first deposit and present you a few hundred free spins in other games.