A London derby takes the spotlight this weekend in the English Premier League as Arsenal visits Chelsea on Sunday. Chelsea is in third place in the table, eight spots ahead of Arsenal, but the Gunners can pull even on points with a win at Stamford Bridge. 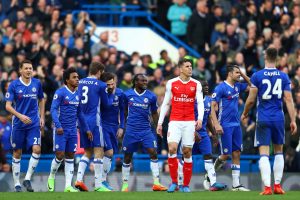 What To Know About Arsenal

After getting routed at Liverpool, Arsenal returned from the international break with a 3-0 win at home over Bournemouth. Danny Welbeck scored a pair of goals and also set up a goal for Alexandre Lacazette as Arsenal needed this performance after playing so badly against Liverpool. But Arsenal still has a few things to work on, like fitting Alexis Sanchez back into the team as he was brought on for Welbeck late. Sanchez was locked in a transfer saga before the break and never went to Manchester City, but Arsenal needs him to be at his best if they want to compete with the top clubs in England. They’ll also need him in Europe as Arsenal will play in the Europa League at home against Cologne on Thursday. Injury-wise, Arsenal will be without Francis Coquelin as he hurt his hamstring against Bournemouth.

What To Know About Chelsea

Chelsea ran out to a 2-1 win at Leicester City as they got goals from Alvaro Morata and N’Golo Kante, who scored against his former club. They allowed a penalty to Jamie Vardy after 62 minutes, but overall it was a comfortable win for Chelsea, who then stormed to a 6-0 win against FK Qarabag at home in the Champions League on Tuesday. Pedro, Davide Zappacosta, Cesar Azpilicueta, Tiemoue Bakayoko and Michy Batshuayi scored for Chelsea, who also got an own goal from Qarabag’s Makism  Medvedev to finish off the scoring in the 82nd minute. It was a performance that should give Chelsea plenty of confidence heading into Sunday’s showdown and furthermore, they come into this game without any injuries outside of Danny Drinkwater, who has yet to make his debut after joining Chelsea from Leicester. He has a calf problem and likely won’t be ready for Arsenal.

Chelsea comes in as a -134 favorite at home in this contest, while Arsenal is rated at +350 and a draw is listed at +275. The two have met 12 times since October 2013, with Chelsea winning five and drawing two of those games. Arsenal won on penalties in the Community Shield in August and then Chelsea lost to Burnley at home to open the Premier League season, but they’ve gotten on track since then. Meanwhile, Arsenal have disappointed, and they’ll need their stars to play like stars on Sunday. The key matchup could come in midfield as Kante is the best shield that a defense can have; Granit Xhaka has to do the same for Arsenal, or something close to it. A point would be great for Arsenal and if they can steal a win, even better. Chelsea will be out for revenge, however, and if they get on a roll, they could run rampant.

Get the latest betting lines on all of the EPL games for this weekend at Play Shangrila!