Diamond Empire slot from Microgaming is a whole empire of translucent precious gems that blinds anyone that gazes upon it. The one-armed bandit is of a popular 3-reel style. 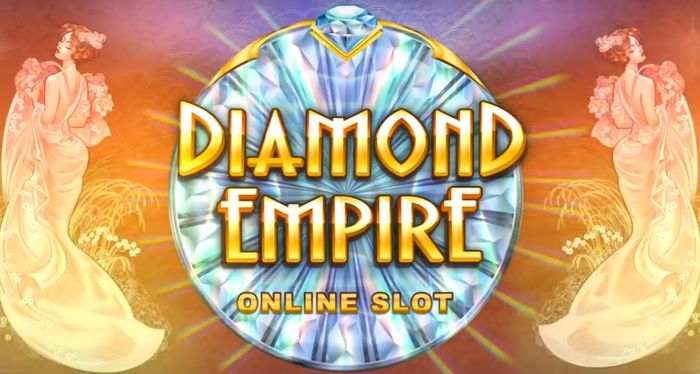 This is the second child of independent Triple Edge Studio working for Microgaming studio. The first one was Playboy Gold. In order to transfer the luxury atmosphere to its fullest, art nouveau was chosen as a slot’s style. In the bonus game, you may get up to x888 of the bet, which is quite a lot for a 3-reel slot. 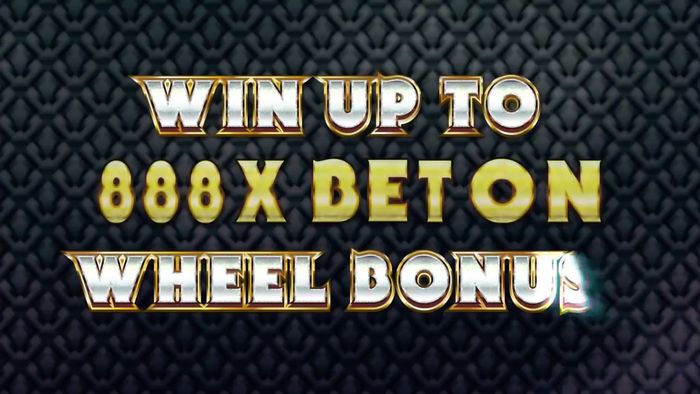 You may launch the slot from any chosen device, it adapts to the screen resolution and orientation automatically. 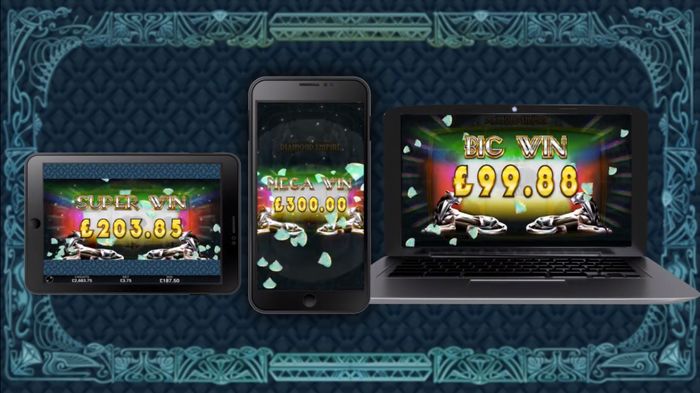 The premier of the slot was on April 18, 2018. And right away the slot appeared at online casino ShangriLaLive. This is an official, licensed version that works through the Microgaming’s servers. Thus, the slot works properly, giving out the winnings stated on the official website.

Diamond Empire slot is incredibly simple: there are 3 reels and 3 rows, 15 fixed pay lines. You will be amazed with shiny diamonds and art nouveau style. The music was created specifically so that you feel yourself like a million dollars. 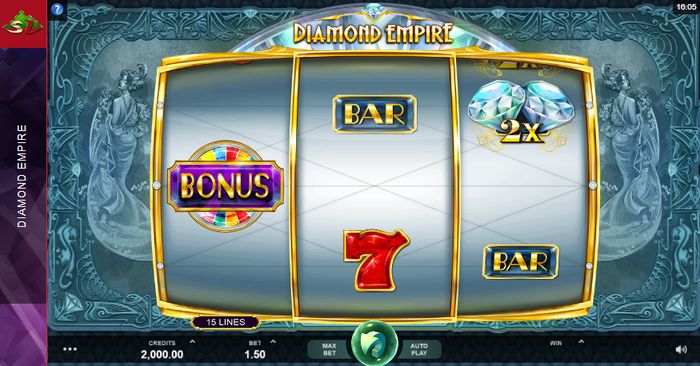 The combos form in a classic left-to-right way. The highest combo is being payed out. 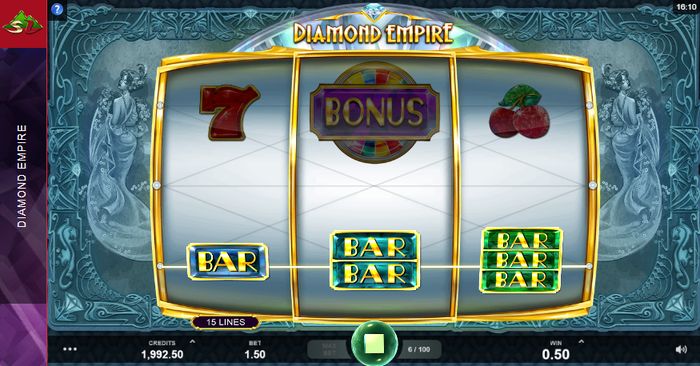 Thanks to high coefficients, the game has regular super wins. Just be patient and you will receive a huge payout. 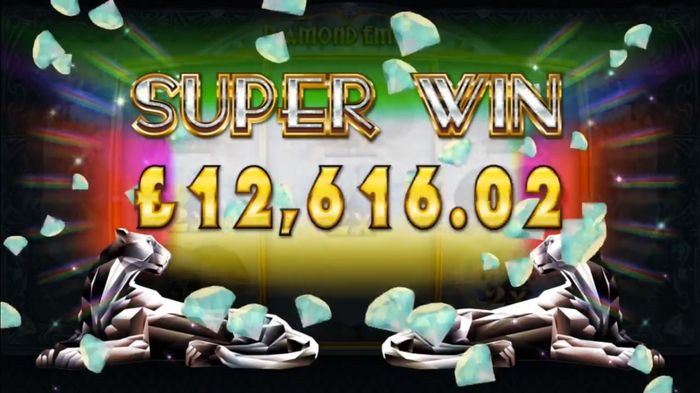 Because the game is so simple, there are only 7 symbols. They are divided into 3 categories:

Standard 5 symbols: sevens, cherries, and 3 types of BAR signs. The latter form combos even if there are different number of bars on the pay line. 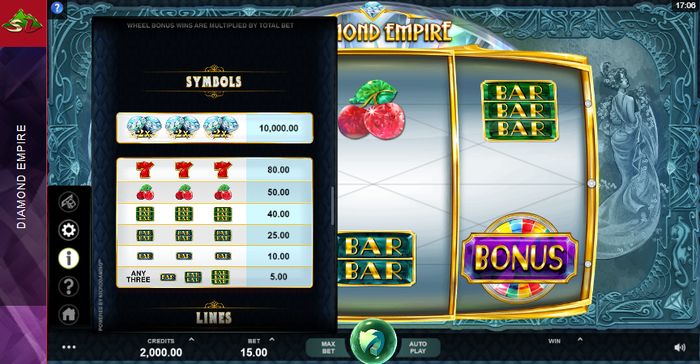 Wild symbols is depicted in a form of sparkling diamonds. By themselves, they may form a combo with the highest payout – x650 for 3 symbols. If, however, there are 1 or 2 symbols on the line, they will multiply the combo’s worth by x2 or x4 respectively.

A scatter with the word “Bonus”, launches Bonus Wheel game. 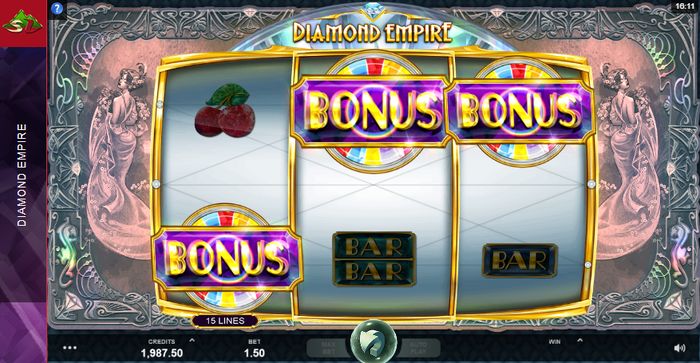 Bonus Wheel is the only bonus game of the slot. Although, if ti did fall out, the bet will be multiplied by at least 8 times. If the Lady Luck is on your side, you may get an astonishing x888 multiplier! All one has to do is to spin the wheel. 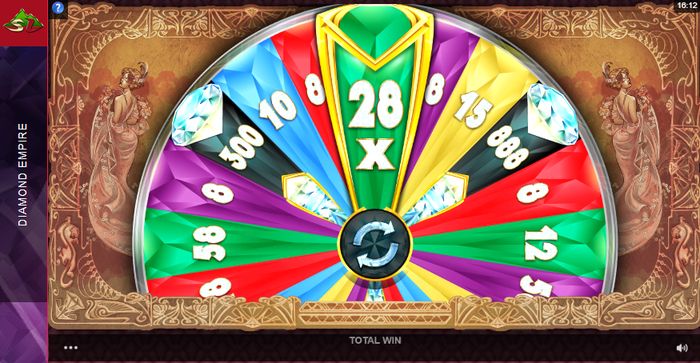 When the wheel stops, there will be shown the multiplier of your bet. 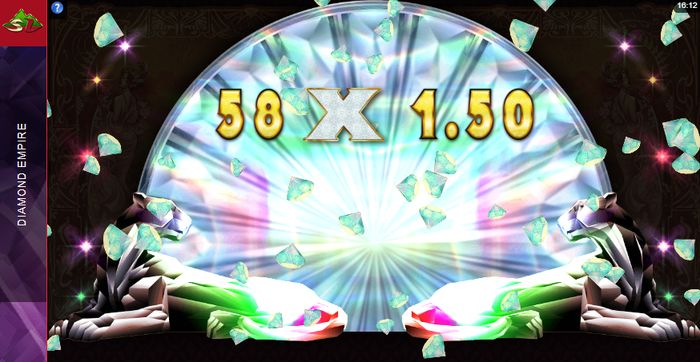 When the diamonds stop falling on your head, the final payout sum will become visible. 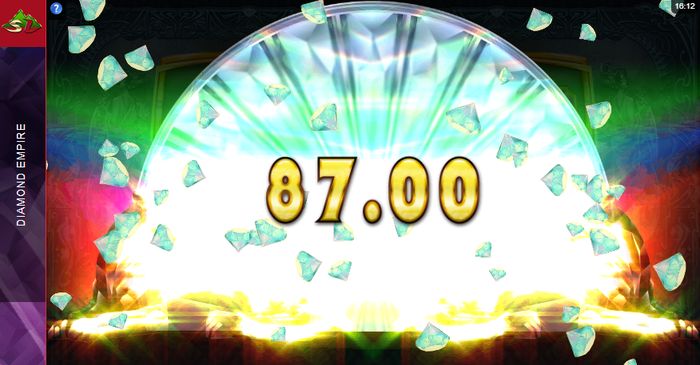 Incredible simplicity and generosity made this slot very popular. Right from the start, it climbed to the Top 5 most popular Microgaming games, and Top 100 most searched games overall.

Where to play Diamond Empire Slot

Play Diamond Empire slot only at licensed casinos with original version of generous payouts. At ShangriLaLive, you will have you first deposit doubled and will receive some free spins.