Group C of the CONCACAF Gold Cup resumes on Thursday in Denver. There are a couple of games on tap as El Salvador meets Curacao in the early game followed by Mexico and Jamaica in the late game. The latter contest is an important contest as it is a battle of the group favorites. 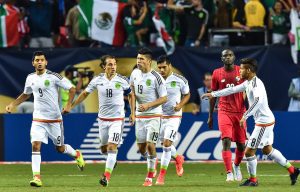 Both of these teams need a win to stay in the hunt for the knockout stage after losing their opening matches. Curacao, who qualified for the Gold Cup for the first time since 1973, held the fort for 45 minutes before falling 2-0 to Jamaica. However, Curacao didn’t back down as they had 21 shots, and six were on target. El Salvador lost 3-1 to Mexico as Nelson Bonilla equalized in the 10th minute, but El Salvador couldn’t keep the Mexicans quiet after that. El Salvador has made to the quarterfinals of the Gold Cup in two of the last three trips, but to keep that dream alive, they’ll have to get something out of this game; a draw would help, but a win would be better.

This will be the fifth time that these two have met with El Salvador winning twice and drawing once. They met in a friendly in Curacao in March and that ended in a 1-1 draw. Felitciano Zschusschen scored in the 74th minute for Curacao before Rodolfo Zeyala equalized in injury time for El Salvador.

Mexico got an eighth-minute goal from Hedgardo Marin before El Salvador fought back, then Elias Hernandez and Orbelin Pineda scored in the 29th and 55th minutes, respectively. Mexico, who won the Gold Cup for the 10th time in 2015, got a big game from Hernandez, who also had two assists. However, the defense was shaky once again and Mexico was also missing manager Juan Carlos Osorio, who was banned for six games for protesting in the Confederations Cup. Jamaica got second-half goals from Romario Williams and Darren Mattocks in the 58th and 73rd minutes, respectively, to take all three points from their opener against Curacao. Jamaica is looking to build on their runners-up finish in 2015 and they’ve come with a lineup that could see them finish on top of the group. They have to win this match, however, and not just a tie; all three points would have an excellent path to first place in Group C. With Mexico bringing a squad that is less than full strength after finishing a disappointing fourth at the Confederations Cup, this might be Jamaica’s best chance for a win.

Mexico has had the upper hand in their 13 meetings with Jamaica, winning 11 and drawing one. Jamaica’s win came in a World Cup qualifier back in October 2008 as they won 1-0 at home. Their last two meetings have been neutral-site affairs as Mexico won 3-1 in the Gold Cup final in 2015, getting goals from Andres Guardado, Jesus Manuel Corona, and Oribe Peralta, while Mattocks responded for Jamaica. The two then met in last summer’s Copa America Group C, and Mexico won 2-0 thanks to goals from Peralta and Javier “Chicharito” Hernandez.

Get all of the latest soccer betting odds for the CONCACAF Gold Cup at Shangri La and bet the games today!