Costa Rica and Serbia kick off the action in Group E at the World Cup in Russia, and along with Switzerland, they figure to battle for second place behind Brazil. However, you have to play the games and a win to start the tournament could put either team in an excellent position. The two will play on Sunday, June 17th. 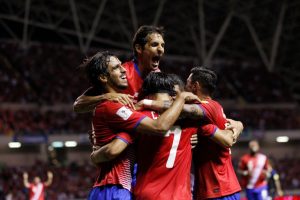 What To Know About Costa Rica

Costa Rica is coming off a run to the quarterfinals in 2014 in Brazil, and they finished second in CONCACAF to get back to the World Cup. They have experienced strikers up front in captain Bryan Ruiz and Marco Urena, who have combined for 38 goals in 171 appearances for their country. They also have solid defenders in front of keeper Keylor Navas, who has been very good for Real Madrid and is one of the more underrated keepers in the world. It is the midfield where Costa Rica could struggle to get a hold of things as Celso Borges has 108 appearances for his country and he definitely needs some help in the middle of the pitch. David Guzman will have to play the tournament of his life to get Costa Rica out of the group stage. Oscar Ramirez has been in charge of Costa Rica since 2015, so his players at least know his system.

What To Know About Serbia

Serbia returns to the World Cup after failing to qualify in 2014, but they won their qualifying group in UEFA to get back to this tournament. Midfielder Dusan Tadic was one of two players to play in all ten qualifying matches, along with defender Branislav Ivanovic, and Tadic forms a very good midfield pair with Nemanja Matic. They get plenty of help from Filip Kostic and Luka Millivojevic in midfield, and Serbia needs to get goals from midfield because they don’t have much up front. Aleksandar Mitrovic has 13 goals in 35 games for his country, while Aleksandar Prijovic just scored his first international goal in his eighth game. Ivanovic and captain Aleksandar Kolarov will marshal a solid defense in front of keeper Vladimir Stojkovic, Serbia also has a caretaker manager in Mladen Krstajic, who will be in charge at least until the end of the World Cup.

Serbia are the favorites in this match at 2.00, while Costa Rica comes in at 4.00 and a draw is listed at 3.20. This is the first meeting between these two countries and Costa Rica are going to have to work hard to close down Serbia’s space in the midfield. However, Costa Rica will also find it tough going forward with Matic fielding an experienced Serbian defense, and they might ask either Ruiz or Urena (possibly both) to drop a little deeper and help out their midfield. On paper, Serbia are the better team and should win this game, but Costa Rica has the experience of playing at the last World Cup and they know their limitations under Ramirez, who will have this team set up and ready to go.

Looking for the odds to win the 2018 World Cup? Check out Play Shangrila to get the odds for matches, props and betting lines to win it all!