Group H at the World Cup in Russia kicks off on June 19th, and the first game features the group favorites. Colombia are looking to build on their sensational run from the last World Cup, and they’ll take on Japan, who are trying to overcome a turbulent lead-up to the tournament. 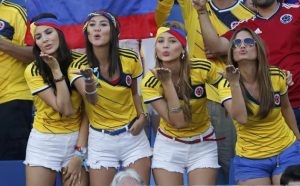 What To Know About Colombia

Colombia rolled to the quarterfinals in 2014 in Brazil and then finished fourth in CONMEBOL to return to the World Cup. James Rodriguez had the tournament of his life four years ago, winning the Golden Boot with six goals, and he led Colombia with six goals in qualification. He went to Real Madrid, but Rodriguez played much better at Bayern Munich and the midfielder will have the confidence to lead his country. Forward and captain Radamel Falcao missed the last World Cup through injury, and he is coming off a decent season at Monaco. Midfielders Juan Cuadrado and Mateus Uribe are very underrated. However, much of Colombia’s success could depend on the back. Yerry Mina and Davinson Sanchez are 23 and 22 years old, respectively. However, they are probably Colombia’s starting central defenders in front of goalkeeper David Ospina. They have the talent, but can Mina and Sanchez play above their experience level?

What To Know About Japan

Japan heads to their sixth World Cup in a row, making out of the group stage twice in 2002 and 2010. They won their AFC group to qualify for the tournament, but manager Vahid Halihodzic was fired in April. Akira Nishino had just two months to come up with this squad, led by captain and midfielder Makoto Hasebe and forward Keisuke Honda. Then you have midfielder Shinji Kagawa and forward Shinji Okazaki, who were left out of a couple friendly squads by Halihodzic. The two are still playing well for their clubs (Kagawa at Borussia Dortmund, Okazaki at Leicester City), and Japan needs all the help they can get. There are also plenty of questions at the back, where Japan are led by Maya Yoshida in the middle and Yuto Nagamoto at fullback. However, changing managers this late in the game could be Japan’s downfall. It isn’t a good sign that a month before the tournament, it hasn’t been announced who is actually on the team.

Colombia are favored in this Group H matchup at 1.80, while Japan are rated at 4.50 and a draw comes in at 3.50. Colombia has two wins and a draw in three meetings with Japan, including a 4-1 win in the 2014 group stage. Colombia had too much for Japan on that day and they should again as Rodriguez flourishes in a free role for his country, which opens up space for his teammates. Falcao, even at 32 years old, will be hard to track by the Japanese back line and now that Colombia’s defense is better at the other end, Japan will find it difficult to counterattack. Japan just has too much going on right now and Colombia should stroll to an easy win.

Looking for the odds to win the 2018 World Cup? Check out Play Shangrila to get the odds for matches, props and betting lines to win it all!